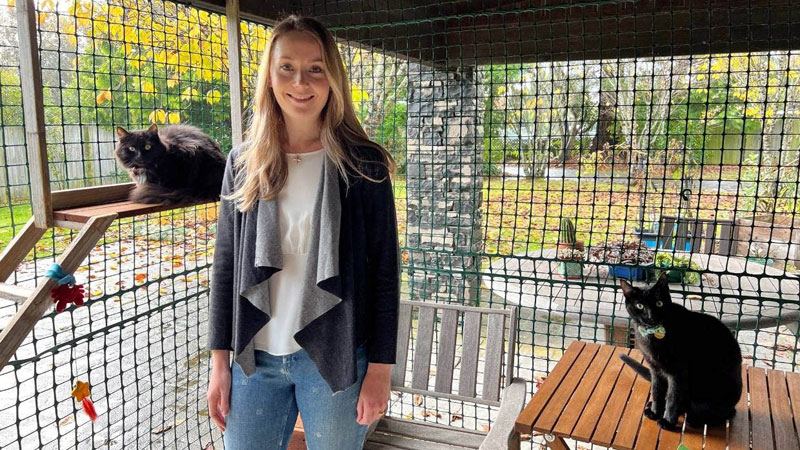 New Zealand is a nation of cat lovers. We have one of the highest rates of cat ownership in the world, says University of Canterbury master’s student Sarah Chamberlain (pictured), who has dedicated her thesis to better understanding people’s engagement in and attitude towards cat containment.

Cat containment is a contentious topic in the media and Sarah says it is important to remember it’s not about demonising cats for the impact they can have on our environment – it’s also about keeping cats healthy and safe.

“Cats allowed to free-roam can lead to predation of wildlife, including native wildlife, disruption of wildlife behaviour, spreading disease like toxoplasmosis, which is a threat to our endangered marine mammals and can be transferred to humans as well, but cats are also at an increased risk of injury or harm to themselves,” says Sarah.

The study aimed to examine which factors best predict engagement in cat containment, and whether there are unique audiences of cat owners in New Zealand that differ significantly in the set of factors that predict their behaviour.

“Our findings were that respondents rarely intended to perform or engage in cat containment, which is what we expected based on previous research. From all the factors assessed, people’s engagement in cat containment and intentions to engage in the future were influenced by a broad range of factors, not just one,” she says.

Factors included if someone had the physical and psychological capability to engage, the social and physical opportunity to participate and the motivation to engage. This includes if someone had positive interpersonal influences (a vet that supported cat containment for example), whether they had the time or resources available to modify their home or environment, were concerned about the negative consequences related to free-roaming cats and believed that cat containment is beneficial for cats.

“Each audience differed significantly in the set of factors predicting their behaviour and also performed cat containment to significantly different extents. The engaged segment participated in cat containment the most and believed it is beneficial to cats. In comparison the opposed segment participated the least and were the least concerned about the negative impacts of free-roaming.”

Sarah says it is important to look at cat management in New Zealand.

“Broadly speaking, in future I’d like to see a rethink on what it looks like to be a responsible cat owner. An important part of this is bringing people on the journey and changing attitudes. I don’t think it is just about putting rules and regulations in place at a council level, you have to change people’s beliefs and attitudes, educate them about the issue, and give them the tools and resources to make it easy to engage.”

“Key contributions from the research are that now we understand the main causes of people’s decisions to participate or not, interventions can be designed that actually address these things for different audiences of cat owners.”

Sarah has decided to keep her cats at home, building them a ‘catio’ which gives them access to the house and outside.

She says her background in marketing has provided valuable skills in social marketing, audience segmentation and behaviour change.

“Some ideas to increase engagement in cat containment based on these findings is to educate people about the prevalence of roaming-related cat injury, use influencers on social media as role models to build positive associations with keeping cats at home and environmental restructuring – making tools easily available for cat containment.”